Herniated discs can cause a great deal of pain and dysfunction. When the cushioning discs of fluid-filled cartilage that support your vertebrae rupture, the results can include pinched nerves and all the serious neurological symptoms that go along with them. If you’re struggling with this condition, you might assume that you have no alternatives but to either live with the pain or submit yourself for major, spine-altering surgery.  Before you cross that bridge consider how chiropractic care can return your body to its full health free of pain in a non-invasive drug free healthcare treatment.

Is It a Bulging, Herniated, Slipped or Ruptured Disc?

Many people get puzzled over the various terms thrown around to describe spinal disc problems. Do you have a bulging disc, a ruptured disc, or a herniated disc? Before we answer this question, let’s look at the basic anatomy and function of vertebral discs.

These discs sit between the vertebrae and act as cushions, absorbing the countless daily shocks that come from walking, running, working, or playing.  A vertebral disc consists of two structures to accomplish this act of shock absorption. The outer structure, called the annulus fibrosus, is a tough, disc-shaped, cartilaginous “container.” The inner layer is a gel-like fluid known as the nucleus pulposus.

A herniated disc can occur spontaneously due to an acute injury or other sudden trauma, but it often starts as a bulging disc. Bulging discs typically develop as you age and your body loses some of its natural hydration, including the hydration that “plumps up” the discs.

Once a disc starts to flatten out, it also starts to bulge outward from its normal place within the spinal column. If one part of the annulus fibrosus develops a weakness, that part of the disc may start to protrude even further. Sufficient weakness or pressure can result in this area rupturing and splitting open. 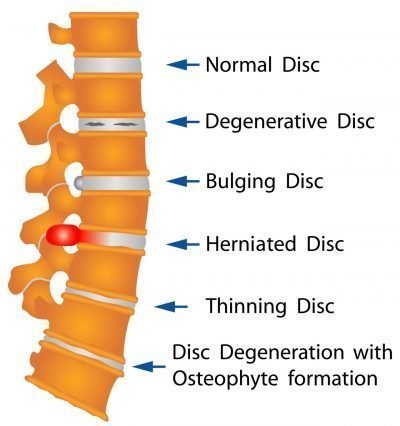 Herniated discs can cause excruciating pain because the annulus fibrosus contains some very sensitive nerves. Even worse, the nucleus pulposus that leaks out of the rupture in the disc contains inflammatory substances that aggravate the discomfort. Parts of a herniated disc may press against the major nerve roots that push out from the spinal column. When this happens, the pinched nerve tissue causes symptoms such as:

Herniated discs most commonly occur within the lower back, although it is possible for discs in the neck to herniate, as well. There are three main symptoms to look for that could indicate a problem with a herniated disc.

The first, and most obvious, is pain. Most people feel pain in their back, as that is the location of the disc. This is not usually where the pain shows up, though. When the herniated disc is located in the lower back, the pain is felt mostly in the buttocks, thigh, and calf. It is also possible that the pain could travel down to the foot, sciatica.

When the herniated disc is located in the neck, pain is typically restricted to the shoulder and arm. If you move your neck, the pain could also travel down the arms or legs as the spine also moves.

Herniated discs can prove so disabling that sufferers will consider almost any kind of treatment that might provide relief. The common assumption among many is that they will have to have surgery to remove part of the disc or have the adjacent vertebrae fused together. The good news is that such extreme methods are usually only necessary in the worst cases.

Most herniated discs will respond to non-invasive treatment methods such as chiropractic care.  Chiropractors are deeply knowledged on herniated discs and know what to look for when making a diagnosis. During the initial consultation, I will perform a physical exam. I will look at the area where the herniated disc is located, along with the entire spine. Chiropractic care includes the overall wellness of the spine discerning any issues that could give rise to a herniated disc. A good chiropractor will also test your reflexes if he or she suspects a herniated disc. If the nerves are not sending messages correctly, the reflexes will not react as they should (indicating a disc is herniated). I will also look at the muscles and soft tissue, looking for signs of atrophy or loss of strength.

Chiropractors treat herniated discs by correcting the underlying circumstances that produced the damage in the first place.  You may need chiropractic adjustments or related chiropractic techniques to correct vertebral positioning and move the disc back into its proper place. These corrections can reduce inflammation while also taking pressure off of nerve roots. We can enhance your results with other techniques such as craniosacral therapy, energy work, stretching or strengthening exercises for the back or neck.

Herniated discs can cause real problems, even when you do not know you have one. If you have experienced any of the symptoms associated with herniated discs, contact me.