The skulls of most healthy newborns are not made up of one large bone structure but are comprised of several bony plates, each joined by fibrous joints called cranial sutures. Eventually these plates adhere into each other as the newborn grows.  Should the growth process happen too early, or in an abnormal manner, the resulting condition is called craniosynostosis.  Also, when a suture is jammed, it restricts the growth of the skull in a predictable way. Craniosynostosis tends to produce pressure on the growing brain and affect the baby’s eyesight and appearance.  Abnormal early fusion of one or more of the cranial sutures, craniosynostosis, is diagnosed in roughly 1 out of every 2000 to 2500 babies around the world. 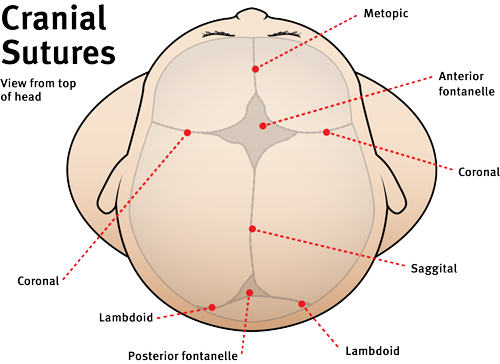 A Study authored by chiropractor Joel Alcantara, the Director of Research for the International Chiropractic Pediatric Association, and published in their Journal of Pediatric, Maternal & Family Health – Chiropractic, focuses on a 3-week-old infant diagnosed with craniosynostosis by her obstetrician and pediatrician

A study published in the April 10, 2010 issue of the scientific periodical, the Journal of Pediatric, Maternal and Family Health, documents the case study of a 3 week old baby girl who was saved from head surgery due to timely specific chiropractic care.

In this case study, a 3 week old girl who was medically diagnosed with craniosynostosis was brought to a chiropractor in an attempt to help avoid skull surgery.   In this case, a mother brought her 3 week old baby girl to a chiropractor following a medical diagnosis of craniosynostosis by her obstetrician and pediatrician. According to the patient’s mother, she was advised that the medical care plan was to monitor her child for 3 months and if craniosynostosis progressed further, surgery would have to be performed on her baby’s skull.

A chiropractic examination revealed the presence of subluxations, and a course of specific chiropractic care was initiated for correction. Measurements of the size of the baby’s skull were regularly taken and showed that once chiropractic care was initiated, the skull started to show normal growth. After 6 chiropractic visits, the little girl was 10 weeks old and her skull had grown from 34.5 cm, to 39.2 cm. After approximately three months of care the girls mother reported that her daughter’s cranial development had progressed so well that she would not require skull surgery.

Dr. Joel Alcantara, a chiropractor and Director of Research for the International Chiropractic Pediatric Association (ICPA) and the lead author of the paper, noted, “In this case we have a defect in the infants skull that did not require a planned surgery following a trial of chiropractic care of the spine and skull.”   He concluded, “The research shows that not only is chiropractic for children extremely safe but it is also highly effective.”